Traditional Athapookalam – Symbolic Meaning of Pookalam made during Onam 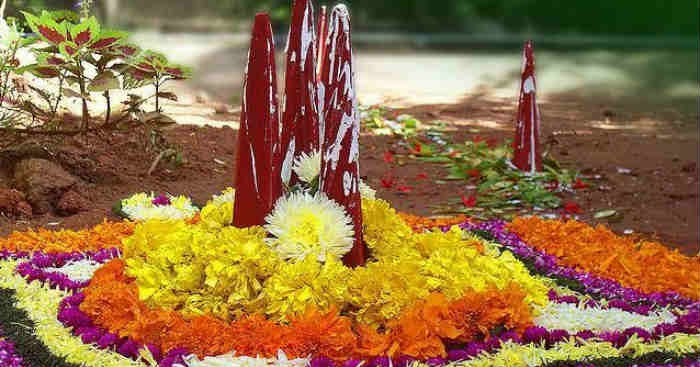 Athapookalam or Onam Pookalam is the flower bed or flower arrangements done during Onam in Kerala. It is a distant cousin of Rangoli in North India and Kolam in Tamil Nadu. Traditionally, the making of the Pookalam begins on the Atham day, ten days before Thiruvonam. Originally, the Pookalam consists of ten small round steps. The ten steps or rings are believed to represent ten different deities in Hinduism. There is also a belief that the floral carpet symbolically represents the fight between Asuras (demons) and Devas (Demigods).

Each day of the 10-day Onam festival used to be represented on the Pookalam. On the Atham day, there will only be a single ring, the next day which is Chithira there will be two rings and finally on the Thiruvonam day there will be 10 rings. On the first day only a single color flower is used, second day two colors and on the final day 10 different colors of flower is used.

Symbolically the ten rings or steps represent the ten deities in the Hindu pantheon. First step is Ganesha, second is Shiva and Shakti, third is Shiva, fourth is Brahma, fifth is Pancha Boothangal, sixth is for Shanmughan or Muruga, seventh step is for Guru, eighth step is for ashta digpalakar, ninth is for Indra and tenth is for Lord Vishnu.

Today, the tradition is rarely followed and importance is given to design. People even use Rangoli and artificial colors to make Pookalam.